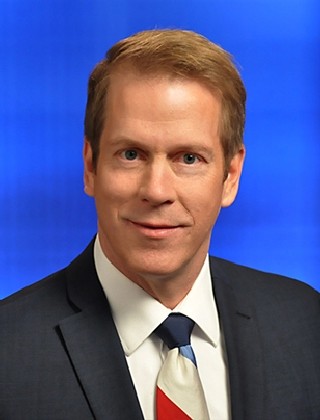 Mark Leland is the co - anchor for Fox 11 News at Five, Nine and Ten. Mark also serves as one of the reporters for Fox 11 Investigates.

Mark, a two-time Emmy Award winner, comes to Fox 11 from WGBA in Green Bay, where he was the main news anchor. Prior to that, Mark worked in Milwaukee, Wisconsin, Washington, DC, Waco, Texas and Binghamton, New York. He has reported from Capitol Hill, the Super Bowl, Appleton’s sister-city in Japan, and the Czech Republic.

Mark is a board member of The Brian LaViolette Scholarship Foundation, and former board member of Prevent Blindness in Northeast Wisconsin, and Golden House. Over the years he has also worked to support the efforts of the Center for Childhood Safety and the Brown County Crime Prevention Foundation.

Mark received his Master’s degree in broadcast journalism from Northwestern University’s Medill School of Journalism in Evanston, IL. His bachelor’s degree comes from Texas Christian University in Fort Worth, Texas, home of the Horned Frogs. Mark is also a freelance writer for "The Business News" and other publications in Northeast Wisconsin.

Mark and his wife, Kathi, live in the Green Bay area. They are proud parents of two children, Austin and Summer.